If you were an objective alien looking at the earth, what would you think of a civilisation thatSTILL engages in war and violence after being on the planet for over 2000 years (of course we have been around a lot longer – but we will use 2000 years as a benchmark)?

So here we are in a primitive world that still thinks that waging war is an acceptable way to resolve conflicts between different cultures, race, political systems, and probably just about anything else those in power can think of. Or is that the way it is?

Before looking at war and the perception of ‘enemies’, it may be beneficial to take a brief look at the psychology of control. There are plenty of reliable resources on the internet if you would like to take an in-depth look into this subject. The following is based on ways cults may influence a person or a group (very similar to government etc).

Philip Zimbardo (psychologist. Professor at Stanford) says that mind control is a “process by which individual or collective freedom of choice and action is compromised by agents or agencies that modify or distort perception, motivation, affect, cognition and/or behavioural outcomes”

Margaret Singer in her book Cults In Our Midst describes her six-point system, where

So you may wonder what this has to do with wars and national enemies. Perhaps stop and thing for a minute about how the concept of enemies is presented to the public and the justifications used to initiate war/aggressive action – ESPECIALLY in recent times (perhaps over the past 20 years). You may see a familiar pattern and a very well know (and often used) tactic.

This is a 3 phase system:

Perhaps you may also be wondering why those in power would want to create such a horrific situation. There are three main reasons:

A ‘False Flag’ operation is where an organisation (such as a government) will create/orchestrate and incident and then blame another organisation for it. It is as simple as that. This tactic has been used many, many times throughout history with one of the most recent and high-profile operations being the alleged attack on the twin towers on 9/11.

The more extreme and horrific the ‘False Flag’ operation the more it will be believed by society, working on the premise that an organisation the society is associated with could not possibly consider anything so horrific. A very, very effective tactic. Because of the horrific nature of the event members of society will refuse to accept any evidence (no matter how strong) that this was a ‘False Flag’ operation. This is called cognitive dissidence – a highly useful natural psychological response for those in power.

As you are reading this you may be thinking that this is just not possible in today’s transparent and civilised society – what could possibly be the reason except pure evil! This is cognitive dissidence at work and all humans will use it to some extent. 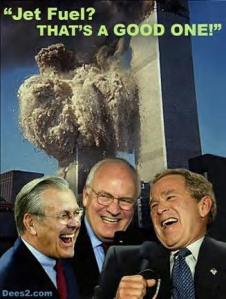 Prior to 9/11 the western powers had no reason or justification to launch military action in Afghanistan. When 9/11 occurred there was a public outcry. The incident was blamed on Al Qaeda.  Society was in shock and afraid that there would be more attacks in the west and that society was under serious threat from a foreign ‘enemy’. So those in power presented the proposal that they would go to war (‘war on terror’ was the phrase which implanted and reinforced the idea in society) and wipe out the enemy and everyone would be safe – which was accepted by a society held in fear.

And so Western forces were deployed and have been there ever since in a supposed war – a war that cannot possibly be won. A very useful source of perpetual conflict, and therefore a very good tool to ensure society is kept in a state of fear. 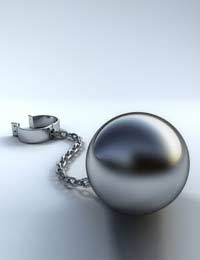 Now think about what has happened in society as a result of the 9/11 event. For one,legislation has been introduced that SERIOUSLY restricts the freedom of society. Legislation that otherwise would have been rejected as oppressive and fascist. Secondly groups within society have become suspicious of each other, further fragmenting the structure of society (the divide and rule principle). This stops groups in society organising themselves and possibly opposing the actions of those in control. 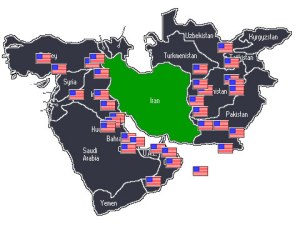 Another benefit to those in power is that they can maintain military forces in the Middle East with little opposition. If you look at a map of where western (and in particular US) military bases are located you can see that they are in very strategic positions. Mostly encompassing Iran (at the current time) which is being seriously threatened by western forces.

At the time of writing we have a situation in Syria. The western powers (primarily the US)allege that there is something of a revolution going on there. However, if you dare to look into what is happening in Syria in a little more detail you will see that those who are supposed to be in opposition to the government are committing horrific acts against the Syrian people – their supposed own people – using NATO supplied weapons.

The reason for the Syrian conflict is quite straightforward. Those in power want control of the middle east and are ‘picking-off’ countries there one-by-one.

It seems that there is one country that those in power consider to be problematic and a serious thorn-in-the-side. Iran. Iran is a major force for the western forces to overpower. Again, if you look at a map of western military presence in the Middle East you will see Iran is surrounded. 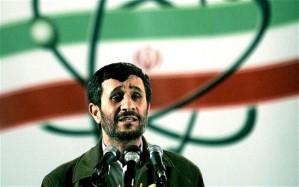 If we ignore the propaganda concerning Iran, the fact is that Iran has not been a military aggressor for well over 200 years! And if you take the time to listen to the Iranian president you may well find that he has a reasonable argument against the claims made about nuclear weapons that may or may not be in the country (which is the allegation made by the US).

Why would those in power be so interested in controlling the Middle East. To put it simply, they want to ensure there is no opposition to their long-term plans of creating a One World Government (aka New World Order). 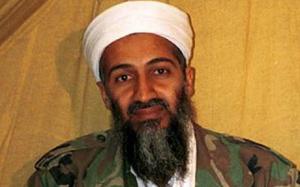 And what about Bin Laden? What a ridiculous situation that was. The explanation by the US that they didn’t know where he was with all of their intelligence, then a CBS news crew found him and conducted and ‘exclusive’ interview. Are CBS more powerful than the CIA? Of course not. Then the sham of apparently invading Bin Laden’s compound. Bin Laden died in 2001!! Why would they ‘bury’ the body at sea – of which there is no real photographic or video record – ridiculous. What is also very strange is that he appeared to become much younger as the years rolled on!

That is a little taste of why we are still engaged in the primitive actions of waging war. As a supposed ‘civilised’ society that has been around a while and is supposed to have evolved, it is ridiculous that we still engage in armed conflict with each other.